Had the honour of being invited by the Scia’new First Nation to participate in a smudging ceremony today. It is their way of purifying and removing negative energy from people and environments.

I have to admit that, as a white man, I was fairly nervous about messing up the ritual but thankfully I didn’t have to go first so it all went smoothly as I just followed the Chief Chipps’ lead. Although I definitely did something amusing as Shirley, the Elder who performed the ceremony, had a big smile on her face during my turn with the smoke. 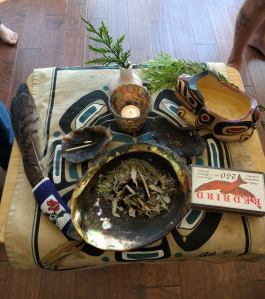